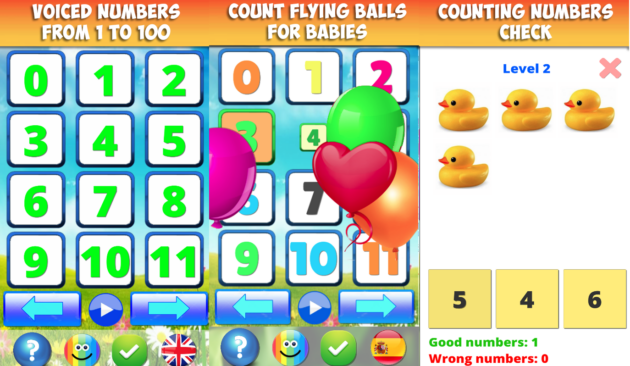 Math for kids is very important! In our game there is addition and subtraction, comparison, we learn the score. Examples are voiced, plus the child himself can click and count. Mathematics grade 1 and even kids for free, as in our game there are no game purchases!

The child will quickly learn the numbers for toddlers, especially the application is completely free! The game is designed for children from 3 x to 5 years and older. The numbers are displayed on the screen, as on the phone the child clicks on the number – balls fly out, the number of balls is equal to the number of numbers. We learn to count easily and simply, the child bursts balls and learns to count to 10 and 20, and for the smartest to 100

Still there is a game guess the number. Do better with your child at the same time for 10-15 minutes a day, as long as there is interest. After studying the numbers, praise the child: playing on the tablet, kissing mom, something sweet. Learning should be fun, the child should enjoy doing it!

Cards for children, numbers are a convenient way to study numbers, a child clicks on numbers, a card with a number appears. Quickly and easily learn numbers.

The game has 5 types of voice acting: numbers in German, numbers in English, numbers in French,numbers in Espanol and in Russian. Numbers in order from 1 to 100, it will be easy for the baby to learn other languages.

Game numbers free offline, if you liked our game the best payment, this is your review. Thanks and success to your children. GOOGLEPLAY APK